As the first step towards learning Docker downloaded the Docker toolbox for Windows. I followed the instructions and installed the Docker in my local machine(Windows 7). After I installed Docker, I wanted to verify if it was working. So I ran the Docker machine and get the below error which I have attached here.

You can clearly see the error message saying that

Error in driver during machine creation: This computer does not have any VT-X/AMD-V enabled.Enabling it in the BIOS is mandatory.

I asked my colleagues have they faced any kind of issues while installing the Docker. But none of them had faced this issue probably because they were using Windows 10 or perhaps some other hardware. So I searched on the Internet and I have come to know that Docker works only if the Virtualization is enabled.

Enabling the VT-X/AMD-V setting in the BIOS

If BIOS VT-X is not enabled, don’t worry much. It’s an easy process to enable the virtualization in BIOS setup and run the container.

This process differs slightly on each machine. If your BIOS menu is different, Google for your OS and hardware.

Once I enabled the VT in BIOS, I ran the Docker container and it ran. To verify your installation just run the hello-world program in the Docker.

If this problem has been solved, you will get a success message similar to the attached image 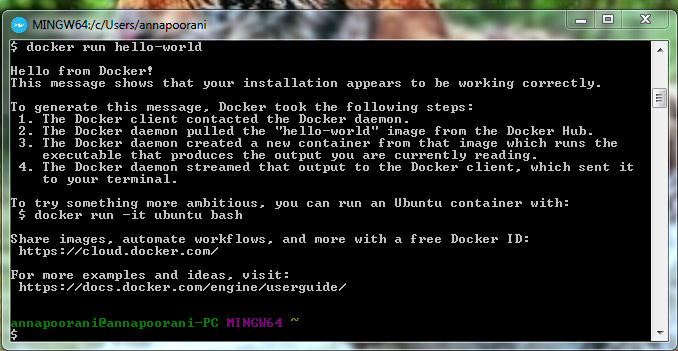 I completed my Master in Engineering (Computer Science) and moved to academia. I pursued a career in teaching for several years. I handled several undergraduate Computer Science courses: Java, Information Security, Data structures and Operations Research. I was looking for remote working opportunities that would allow me to continue pursuing my technical interests. So I joined Qxf2. I have been enjoying testing software, writing Python and picking up a whole host of other useful testing tools. I am an enthusiastic learner, highly collaborative and strive for continuous improvement. My hobbies are practicing Yoga and playing badminton.

How to get your code inside a Docker Container
Annapoorani Gurusamy