For a long time, Qxf2’s API tests were not really object-oriented. We were relying on (at best) a facade pattern or (at worst) the God class anti-pattern. Our colleague, David Schwartz of Secure Code Warrior, helped us make our API automation framework more object-oriented and easier to maintain. Thanks, Dex, for all the guidance, examples, code, code reviews and for helping us improve our API tests!

We have not yet managed to implement everything we learned from Dex. By no means we are claiming this is a good, ‘final version’! But we felt our API automation framework had improved enough to share at least a skeleton. We genuinely feel that you could benefit from seeing the code at this stage and then improve from here.

For this example of Player-Interface layer based API Automation Framework, we have written a sample API application called cars_app.py using Python Flask and created Python based automation tests. That way, you can follow along easily.

Following image represents workflow of the framework, click on it to enlarge

We’ll spend the next few sections looking at each block along with a useful code snippet.

We use a Python module called Mechanize to make our REST calls. The Base Mechanize module includes wrappers for the Mechanize API calls like GET, POST, DELETE, PUT. These methods return JSON response with status code  or  error details with status code for further debugging. Requests is another popular Python library that many people prefer. You can easily substitute Mechanize wrappers for Request wrappers.

This layer is a composed interface of all the API endpoint classes. In our cars_app.py application we have features related to car details, registration and users.

This is the layer where business logic and test context is maintained. The player layer does the following:

For this example, we are going to add a method get_cars() that gets session information, creates headers, makes a call to the API interface’s get_cars(), processes the result and passes it to whoever called it.

In this section, we’ll show you examples of writing a couple of tests. 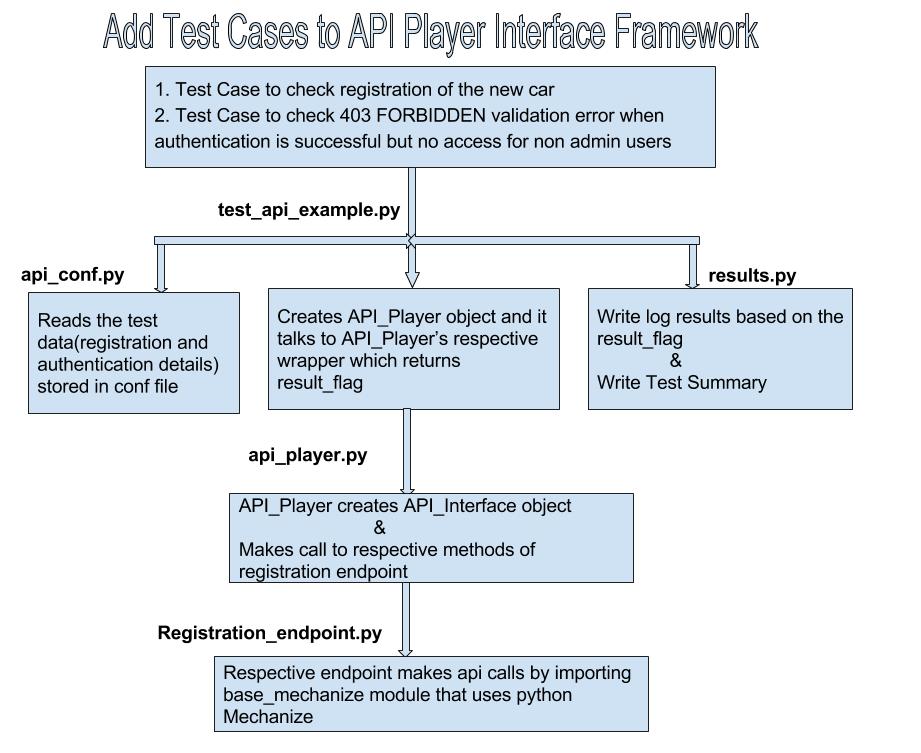 There are two steps to run this test:

You simply need to navigate to where you have your cars_app.py file and then run python cars_app.

If things go well, you should see an output similar to the contents below 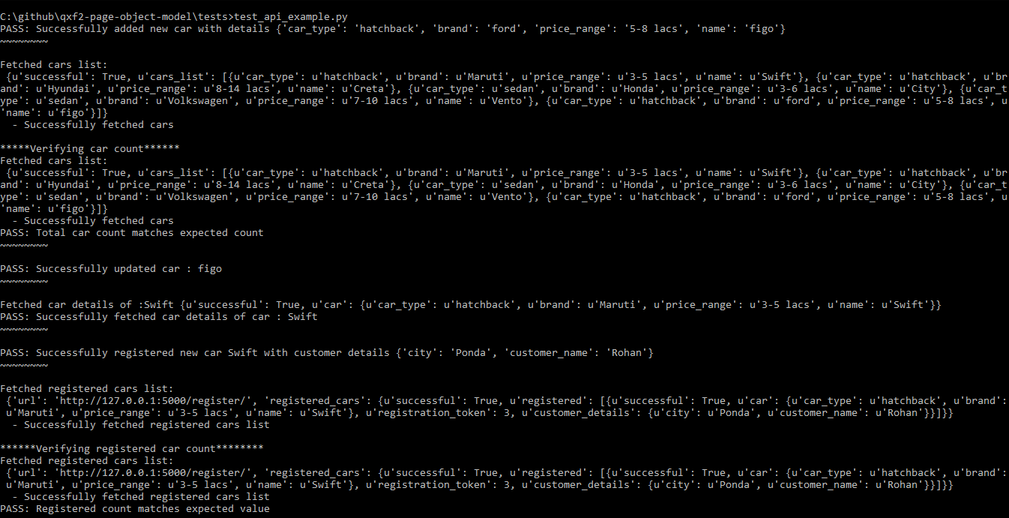 Code is available on GitHub

If you liked this article, learn more about Qxf2’s testing services for startups.

I have around 10 years of experience in QA , working at USA for about 3 years with different clients directly as onsite coordinator added great experience to my QA career . It was great opportunity to work with reputed clients like E*Trade financial services , Bank of Newyork Mellon , Key Bank , Thomson Reuters & Pascal metrics.

Besides to experience in functional/automation/performance/API & Database testing with good understanding on QA tools, process and methodologies, working as a QA helped me gaining domain experience in trading , banking & investments and health care.

My strengths are analysis, have keen eye for attention to details & very fast learner . On a personal note my hobbies are listening to music , organic farming and taking care of cats & dogs.