At Qxf2 services, we get to pick and work on any problem area (eg: Onboarding, Training, etc.) based on our interest. The one I take care of is ‘Employee Engagement. As a part of this initiative, I started congratulating employees on their work anniversary in the form of a Work Anniversary Image.

How I solved the problem?

Breaking down the problem into mini problems

I began breaking down my problem into 4 sub problems and found respective solutions for each which were :-

Firstly, the problem was maintaining and polling employee details to find out which employee has a work anniversary. However, a major part of it was already solved by my colleague Arunkumar by building an employee web service to aid in the development of our internal applications which would return employees data at any given point in time.

Secondly, designing work anniversary images on the fly along with specific text overlapped on top of it had to be tackled. For this, I found an image processing python package called Pillow to be useful.

3. Posting Image on the skype channel on the day of Work Anniversary

Thirdly, and most importantly the major hurdle I had to overcome was posting these images on the Skype channel. We had an existing skype sender web service designed using Skypy but it could only send the text messages. As a result, I skimmed through Skypy documentation to check if it can offer a capability to send images as well. I found out an API method documented sendFile. Accordingly we updated our skype sender web service with the capability to send images to skype.

After that, I was left with two one-time tasks of getting a work anniversary base template image designed in coordination with our illustrator Edward and creating a list of work anniversary quotes.

When all the pieces were integrated, the entire flow looked like 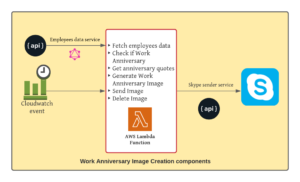 – Employee data is looped through to check if a given employee has a work anniversary. After that, an anniversary quote is fetched from predefined list saved in work_anniversary_quotes.txt file.

– Employees name , anniversary quote is superimposed on a base Work Anniversary template image and saved to /tmp/ location with employees name prefixed to it. This involved use of Pillow and textwrap python packages for image processing and text formatting respectively. 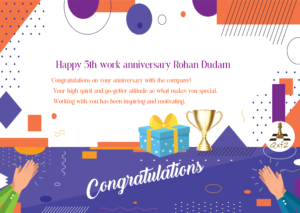 – Generated Work Anniversary Image from step 3 is then sent to Skype channel via skype image sender web service hosted on EC2 instance by our Qxf2Bot skype user. Post sending the image to skype channel, image is deleted from ‘/tmp’ location.

You can view the complete code on Github. 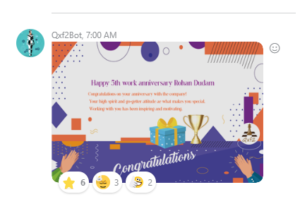 Hope you liked this blog post !! If you have any questions then please leave your comments below.

I am a software tester with more than 3 years of experience. I started my career in an e-commerce startup called Browntape Technologies. I was looking forward to work with a software testing organization which would help me showcase my testing and technical skills. So I joined Qxf2. I love scripting in Python and using Selenium. I live in Goa and enjoy its beaches. My hobbies include playing cricket, driving and exploring new places.

Skype sender as a web service