Selenium recently turned 10 years old. I want to point out a couple of under-appreciated contributions that Selenium has made towards my profession and my career.

1. Selenium makes testing memorable
An under-appreciated aspect of Selenium tests are their inherent theatrical nature[1]. Testing performances rarely evoke positive emotion. Good testing is usually not memorable. Not many testing artifacts make testing memorable. Story-telling seems to be our best bet to make good testing memorable within our companies. Selenium tests are a visual spectacle. People see the application being exercised automagically. This visual display evokes positive emotions in non-testers. The emotion causes people to relate positively to testing and the testers. It makes the testing (technically “checking”) performance a memorable event[2].

2. Selenium has helped motivated testers to stand out
While all automated UI tests are theatrical in nature, I think two key factors allowed Selenium to become a very popular UI automation tool for web applications. One, Selenium is free and open source. Thank you, ThoughtWorks, for making Selenium free and open source. Two, it is relatively easy to get started with Selenium. The combination of the two made it easy for motivated testers to stand out. 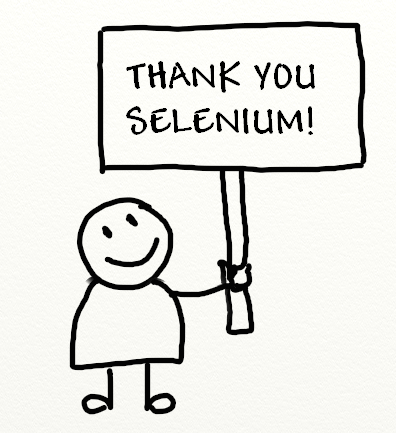 On a personal note, I experienced both contributions firsthand. As a relatively inexperienced tester, I began exploring Selenium in mid-2007. I was among the first few people at my company that explored Selenium[3]. My first attempts were far from good and took too long. But the work helped me stand out as someone with initiative and as someone who was comfortable with technology. Later in my career, I joined an early stage healthcare startup as its first professional tester. I was keenly aware that it was my responsibility to establish credibility for the eventual testing team. One the first things I did, was to write a Selenium script to thoroughly check something that was holding back a release. Prior to me joining the team, this task was being executed by non-professional testers and was consuming hundreds of hours. I shared the test and its results with relevant folk in the company. I made sure to show them the test being executed automagically – not just the result. This exercise helped showcase the difference a professional tester could make to a team. It bought the testing team credibility. Thank you, Selenium!

If have read so far, here are a couple of fun tidbits about Selenium:
1. The 2004 announcement releasing Selenium
2. The name Selenium was poking fun at how bad (a competitor) Mercury was. Selenium supplements save you from Mercury poisoning. Src: Wikipedia

1. Applies to all automated GUI tests. GUI tests, by nature, are visual spectacles.
2. While we love unit tests at Qxf2, they tend to have lower social ROI for testers (in my experience) when compared to GUI tests
3. I actually started with P.A.M.I.E before a more experienced developer nudged me towards Selenium
Arunkumar Muralidharan

Chrome not reachable error when running Selenium test on Linux