This post introduces you to Liquibase – a database changeset management tool. I will cover its installation, usage and execution with MySQL.

Liquibase is an open source library to track database changes. Liquibase supports XML, JSON, and YAML files. This post uses XML files to make certain concepts clear. When Liquibase runs, there are several commands it can execute. The most important one is the UPDATE command, which applies database changes from a file. Generally, every application development is built around a concept of a linear database version which starts at version 1. After a change is added, the version is incremented to 2, then 3, etc. This works well for projects where only a single person adds the changesets and there is only one branch. The approach fails when different developers add different versions to the database concurrently. Liquibase provides a solution to this issue by using a unique identification scheme for each changeset that is designed to guarantee uniqueness across developers.

Changesets are units of work for Liquibase to apply. It is basically the SQL you want to apply to the database. Each changeset should be a single, independent unit of work. You should never have one changeset applying multiple changes unless it is absolutely necessary. Changelogs are how you tell Liquibase what changesets to apply and in what order. The order in which the changesets appear in the changelog is the order in which they will be executed.

Liquibase 3.x requires Java. So let’s get installed first and other pre-requisites for executing Liquibase using command line options and a Maven Plugin.

Liquibase can be executed in various ways depending on your requirement, depends on what works best for you.There are three main ways to run Liquibase:

Automatically on startup – This method works best in environments where you have less control over the deployment process or if you want a simpler deployment process. You can set Liquibase to run automatically on startup using built in Spring or Servlet Listener support or interacting with a simple Java API.
Manual deployment – You can execute Liquibase manually in command line application, or can be run on Ant or Maven. In this post, I will show how to execute using the command line and Maven Plugin. These interfaces allow you to execute Liquibase commands whenever you need, without being tied to application startup.
Executing SQL – For those who need to know exactly what is being done to their database, Liquibase supports an “updateSQL” mode from the command line, Ant or Maven interfaces.

Now that you understood how Liquibase works and about its installation, let’s get started with its execution. For better understanding I have broadly divided into four steps:

Running liquibase using command line interface – For demonstration purposes I’ve created a database named ‘liquibasetraining’ on my local MySQL server, as well as a changelog file (db.changelog-1.0.xml). You can keep it in your project folder or in a separate location, but changelog files should be under version control as shown below.

Here’s the first version of our changelog file with no changesets.

On the command-line navigate to the location where you are keeping the changelog file and run the following command:

When Liquibase connects to the database using the given username and password, it should create two tables in the application database, DATABASECHANGELOG and DATABASECHANGELOGLOCK (as shown below). Each row represents a change made to the database. It contains useful details like id, author, filename, timestamp and tag information.

Instead of specifying command line parameters each time you run Liquibase, you can keep them in a Java properties file named liquibase.properties in the same directory. Then you can just run liquibase <command>.The properties file would look like this. Here we are using master.xml which has the changelog file db.changelog-1.0.xml.

Next let’s create a user table order with id, Ordername and Qty fields by adding a changeset to db.changelog-1.0.xml. In this below example tag element means it applies a tag to the database for future rollback. Here’s the updated XML:

If you look at the database , you’ll see the following structure:

Running Liquibase using Maven: Till now I showed you how to use command line commands with and without the liquibase.properties file. If the command line interface does not fit your needs, Liquibase can be run on Maven or Ant. Liquibase can be controlled via a Maven plug-in which can be obtained from the central Maven repository. It gives advantages like the control over dependencies, running tests, plugins, versioning your software, etc.

1. Create a Project – You need a directory for your project to reside, for this we need to execute the following Maven command on your command line :

Running the archetype plugin will create a skeleton Maven project in the directory my-app along with a POM.xml.

2. Add the Liquibase Plugin to your POM – The pom.xml file is the core of a project’s configuration in Maven. It is a single configuration file that contains the majority of information required to build a project in just the way you want. The POM structure is a bit complex, but it is not necessary to understand all of the tags but understanding important tags is enough to use it effectively. Once the POM.xml is generated, we will need to add the dependencies the database project relies on. For us, it’s the MySQL JDBC driver and off course Liquibase itself.
Configuration of the plugin is done via the Plugin section of the pom.xml, So i have added the Liquibase Maven Plugin in the section. Below is my POM.xml

This is going to add the Liquibase Maven plugin to your project and point your build at a properties file for configuration.

Create a Liquibase Properties File : The property file should contain the following details

Now, you can execute liquibase using Maven command. From the my-app directory execute below command 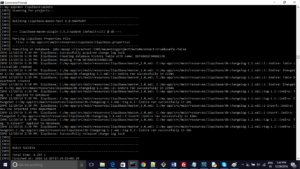 Now check the database, in the databasechangelog table, all changesets are executed. New tables are created and data is populated in the schema mavenblogproject (as shown below)

This post covered parts of Liquibase functionality. After reading this, you should be able to:

Beyond tracking and applying changes to a database, Liquibase supports many other powerful commands for rolling back changes, generating SQL instead of applying changes and generating documentation. If you want to undo an update, liquibase.bat rollback allows you to roll back changesets based on the number of changesets, to a given date, or to a given tag stored in the database.

I am an engineer with about 10 years of experience in software development and testing. Prior to joining Qxf2, I worked with reputed companies like Dell and Infosys. They helped me gain good experience in the manufacturing and healthcare domains. My QA career started at Dell. I got exposure to various testing tools, processes and methodologies, got an opportunity to work on various platforms like JMS Hermes, SOAP UI, data integration, queues, etc. I chose Qxf2 because it allowed remote working. My interests are vegetable gardening using organic methods, listening to music and reading books.

How is a query executed in MySQL?

7 thoughts on “MySQL and Liquibase”